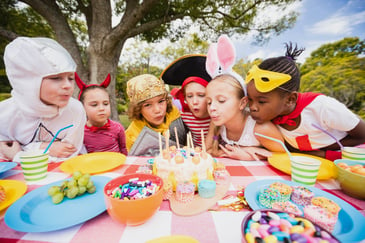 Communication breakdowns might be the number one cause of project failure, but they're also one of the root causes of relationship failure, too. We saw this article about a dad who received an invoice for a birthday party his son was meant to attend but couldn't due to a pre-scheduled family obligation. The whole thing blew up (how else does anything wind up on the internet?). Feelings were hurt, parents were angry, and it could have been 100% avoided if the message had been delivered differently.

We found common Communication Don'ts that could happen to anyone in any situation--check them out and let us know what you think!

Here's a quick recap of what went down: Alex RSVP'd yes for a friend's birthday party, but Alex and his dad forgot that they had already scheduled time with grandparents, and he wound up missing the birthday party without letting his friend (and his friend's mom) know he couldn't make it.

The day Alex gets back from school, his teacher gives him an invoice for a no-show fee from the other boy's mom. Alex's dad gets angry when he reads the invoice that afternoon, and goes to the other boy's house to speak with one of his parents. We'll spare you the rest, but just know that it wasn't pretty, and the situation is rumored to be heading to small claims court.

The reality is that no single person is at fault here. The other boy's mom could have handled things differently, Alex's dad could have responded differently, and with a few changes, this situation could have had a happy ending. But since it didn't, let's learn from their mistakes.

Yes, Alex's dad could have checked the family calendar before committing to the birthday party. Volunteering or committing to do something and then spacing it off for whatever reason and not notifying stakeholders is a good way to throw a wrench in a project or relationship. Communicating changes or new expectations is absolutely critical.

Most parents can sympathize with the birthday boy's mom--we understand her motive for the invoice, even if the invoice itself was a bad idea. The gist was "Hi, you said your son was coming to my son's birthday party but he couldn't make it and I didn't have a heads up to change our head count, so now I'm stuck with a bill that I wasn't expecting to pay. Would you mind covering this cost for your son?" Not entirely unreasonable.

In fact, Alex's dad recounted his conversation with the other boy's mom, and said "I would have sympathized with her about the cost of Alex not showing up, but I just can't believe the way she has gone around it." Mode and delivery matters--the core of the message isn't really combative or unfair, but the way it was handled caused a fumble. Think about how your message delivery will affect the other person--don't just send a message the easy way because it's more convenient for you.

One of the teachers agreed to pass along the invoice for Alex to put in his backpack to take home. That's a big mistake--and the school admitted she shouldn't have done that. Don't insert yourself into a conversation you don't belong in--it's a quick and almost guaranteed way to confuse and muddle the message.

After finding the invoice in his son's backpack, Alex's dad immediately went over to the other boy's house and spoke with his mom, telling her he had no intention of settling up after the way she handled it. The dad's behavior was perceived as combative, and the mom felt cornered--not a good environment for a productive conversation. Approaching someone face-to-face with emotions blazing is always a bad idea. Give yourself time to calm down and approach the other person calmly so you can find a solution together.

We hope these communication mishaps give you a better idea of what not to do! If you want to learn how to communicate better, come see us!