When No One Is Looking

For the last couple of weeks we’ve talked about our legacy and what we’re known for (If you’d care to take a look at those posts you’re welcome to click here and here). In both of those cases we were talking specifically about the way others see and experience us when we’re with them. Today we’ll spend one more week thinking about our legacy, but this will allow us to analyze what we do when no one is looking.

Not long ago I was in a conversation with a friend who relayed this story: Not paying particular attention to her speed in an area close to her home, she came through an intersection faster than the speed limit allowed. She saw flashing lights in her rearview mirror. She pulled over, and when the officer asked her if she knew how fast she was going, that he had clocked her over the speed limit, she replied with,

“I’m sorry officer, I didn’t see you there.”

He replied with a twinkle in his eye, “I know! Usually when you see me, you slow down.”

After a quick chuckle, her story got me thinking about an interesting topic. We act differently when we think others are watching.

There’s a principle called the Hawthorne Effect that says that our performance or our behavior changes (often with an increase in quality) when we believe that someone is watching. If I tell you at the beginning of a meeting that I’m going to record the meeting, then all of us will sit up a little straighter, enunciate a little clearer, and keep our conversation more focused than it would have been otherwise. Simply because we know we are being watched, we behave differently.

1. What do you do when no one is watching?

So my friend drove a little slower when she saw the officer. Many of us set our cruise controls faster than posted speeds when we think that we can get away with it, but we would be more likely to drive at the speed limit if we knew there was a police officer nearby, or perhaps if we had our young kids in the car, or if we were modeling safe driving for our teenagers. Maybe we should get better at driving safer all the time, even if no one else is watching.

How about on those days at the office when you’re just not feeling it? You don’t really want to work on that next task, or it doesn’t seem nearly as interesting as that Facebook post that just skittered across your screen. For how long do we sit and browse social media and disengage with our work while we are on the clock. After all, no one’s really watching us… but our actions have consequences. That extra few minutes of wasted time could have been productive on behalf of our organizations. And, those minutes that we wasted impact our quality and put us behind.

How about taking the easy road instead of the high road. Choosing the shortcut option instead of going the extra mile and doing what is best for our customers or organizations or friends. Dodging a call because the conversation was going to be difficult rather than owning the topic and taking hold of the call? When we think no one is watching, sometimes we don’t behave the same way as we would if we knew someone was watching. I encourage us to reflect on this and see if we can do even better.

2. What do you say when they’re out of earshot? 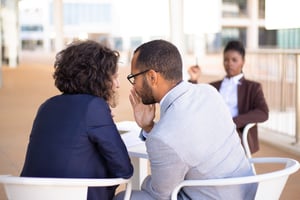 I can cite countless examples in the workplace when I have heard people make comments about their colleagues or about how situations were handled that they just wouldn’t have said if the person being discussed was in the room. I can think of coffee shop conversations and dinnertime conversations where the same would be true. Especially when we are all “Iowa nice” there are things we wouldn’t say to that other person. But, when that person is out of earshot, we are quick to say things that are less uplifting. We may even adjust the story so that we appear more like the character we’re trying to create for the story, rather than who we really are.

I invite us to think about this behavior for two reasons. One, if your words have been heard by anyone then there is a chance they will be repeated. They might be taken out of context, but they might just be repeated as you said them. I just watched the movie Mean Girls recently and was struck once again by how quickly words can damage others. Outside the fear of your words being repeated to the other person, there’s the other truth that when others hear you say unkind things about other people, they wonder if you say those unkind things about them too. The impression that you give is someone who might be hard to trust, or someone who sees the negative in a situation or a person. Wouldn’t it be nice to be known as the optimist or the person who always has a nice thing to say about someone? The person who demonstrates grace or forgiveness?

3. What thoughts are rattling around inside your head? 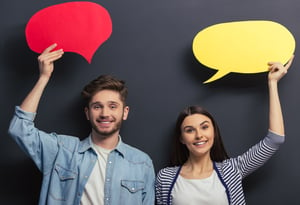 There are two reasons that I want to encourage us to stop and reflect on our thoughts. Even if the words that are coming out of our mouths do not tear others down, the reality is that our thoughts create our reality, and we have the ability to co-create the situations that we’re in. If the snow is falling yet again on my commute, I have the potential to think, “Oh crap, another rotten drive in surrounded by a bunch of idiots who don’t know how to drive in the snow.” But, I also have the potential to think, “A fresh layer of snow to cover up the gray, how lovely! I’ll give the person next to me a little grace, and I’ll give myself a little extra stopping distance.”

There is all sorts of talk that goes on inside our heads. The messages inside your head that are directed at yourself like, “I’m such a failure; I messed up again: I can’t get it right,” those statements of negative self-talk are another example of creating a reality for yourself. They cause you to see yourself in a negative way. They limit your ability to try new things, seek help, or make that one last attempt that would have been the one that succeeded. Limiting and negative self-talk is something we hear in our heads more than we utter with our mouths, but that doesn’t make it less destructive. I invite you to reflect on your self-talk and look for ways to build yourself up instead of tearing yourself down. Use language instead that focuses on the road ahead, the future, and the results you want to see. Like Thomas Edison, as he was working on the light bulb – but had not yet figured it out – said “I have not failed. I’ve just found 10,000 ways that won’t work.”

So, there you have it, three things I encourage us all to stop and reflect on in these next few days. The things we do when no one is watching, the things we say when we think we are out of someone’s earshot, and the things we think that no one else can hear. By shaping these things to be positive and ensuring they align with the person we want to be, we can build a better legacy. I invite us to reflect to be even better at work and at play. What are your thoughts? Join us on social media and chime in with your comments!