4 Things To Look For In An Elected Official

Elections are a fairly common occurrence in this country, whether at the polls on Super Tuesday, or within professional organizations or other groups. Many of the professional associations of which I’m a member are experiencing their annual election process right now.  And with election day literally around the corner for many local races, this seems like the right time to chime in with a couple of thoughts around 4 things to look for in someone running for a public office or for the elected office of a professional board.

1.First and foremost is a desire to serve.

The very fact that someone is willing to go above and beyond the requirements of their day job and volunteer on a professional association, or take on the oftentimes thankless responsibilities of public service, is to be commended.

”If someone has expressed a desire to serve the good of the community to which they are seeking to be elected, that’s a good reason to stop and listen more to what they have to say.”

And even a bit further than that, the candidate who will stick out for me is the one who demonstrates a willingness to put “self” last – or at least not ahead of those being served.

How to know for sure? I guess you can’t really know a person’s heart, but their actions should demonstrate a commitment to putting others first, certainly the citizenry that they are serving.

Caution:   If their actions and the things that they’ve done so far seem to favor a particular interest group to the exclusion of the good of the community they are serving, that might be an opportunity to ask if the candidate who they serve and how their priorities align with those of the community.

2. Once we’re sure they want to serve, then consistency of character is critical. 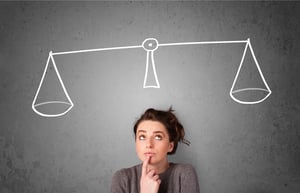 Is the person that you are considering voting for the same person, consistently, in all settings?   I’m not discounting the need to adjust our communication style or our appearance for a particular situation, but I am talking about their character. Is it consistent?

A local mayor I know who has served faithfully for four years and is currently running for reelection, is also someone I know as a fellow parent of orchestra students, a member of our local church, and as someone also involved in other things in our community and in his “other job” as a college professor. And in every setting I see him, he’s the same guy. He’s consistent as a parent, as a churchgoer, as a conversationalist, as a City leader, as a college professor.  Every time I’ve seen him, he’s the same guy through and through. Read his Facebook posts, his Twitter feed, listen to him talk at his kids’ parties, hear him speak to the city Council – he’s the same guy. He’s absolutely consistent.

“That level of consistency is to be praised, and if you have a candidate who is that consistent, that’s a great reason to support them.”

In this dark, biting, mudslinging world that we live in, full of violence and hatred and tinged with a political discourse that has absolutely run amok, if you’ve got a political candidate who is honestly and intentionally staying above the fray, they’re worth your vote.

In that same election I just mentioned, the other candidate is co-presenting at an upcoming small business conference, wherein the title of his message is “Be Honest. Does Your Brand Suck?”  Isn’t there a more positive way to draw a crowd or to offer expertise?

I’m not saying we only look at the positive or that we artificially paint the world around us with rose-colored brushes.  I agree that there are times when a hardline message is the only way to go. I agree with calling a spade a spade to help affect change. But if we choose to engage in negative dialogue for no other reason than a laugh or a sale, then I wonder how quick we’ll be to let our political discourse and our power turn negative.

But, if a candidate for public office or for service in a professional association demonstrates themselves and their message with a negative spin rather than a positive spin in their day jobs, how will that translate to finding the best possible outcome for those involved in the weary hours of long discussions and tough decisions?

There’s a lot of talk these days about getting people from the outside or getting fresh blood, or trying something new. I am all for that!  I treasure fresh perspectives and innovative ways of looking at things.  I’m working on a curriculum to help young professionals find better ways to get their messages out so that the value they bring to the table isn’t lost by those who can’t see past their youth.

And in my current role in a professional association, I find myself working along perhaps the most tireless and committed young professional I’ve ever known.  Her boundless energy and willingness to roll up her sleeves and get the work done for our members is humbling to the rest of us!  In her case, her youth doesn’t translate to inexperience, because she’s consistently been willing to work alongside others and learn from them before stepping into leadership.

But if on the ballot for my community or my professional association, I see an individual who is experienced, who has a proven successful track record of public service and of delivering results in a similar forum, I would be far more likely to support that experienced person than someone green or new to public service or to the association.

Does that mean I don’t think there’s a place to start?  Of course not!  You can’t get experience without trying something.  But if a candidate can’t describe relatable experiences, or hasn’t sat in on or observed or actively contributed to the community they are seeking to serve in tangible, experiential ways over time, I’d prefer to choose a more seasoned, experienced candidate who has been repeatedly observed in action for our greater good as a community.

Does that help you this election season?  What are your four?

If you’re part of an association or a professional group that has an elected Board of Directors, or if you are part of a community that is facing a local election – school board or mayor or city council or any of the other valuable ways in which our citizens can support each other through public service – pay attention to those around you who are stepping up to serve, and get to know them and then vote!

And then, go one step further, get involved, seek out opportunities to volunteer and serve alongside them. Together, we can make things even better!