Since 2010, Your Clear Next Step has hosted lots of interns. The vast majority of our internship experiences have been successful. A couple were a struggle. Some lasted a semester, while some lasted multiple years. Right now, we have two who are team members working with us – one who opted to continue her part time internship even as she moves on to grad school and got married this past month, and the other who accepted a full time position with us, starting a few days after her college graduation. (On the right are two previous interns who were amazing with YCNS and have moved onto some fantastic opportunities.)

Since we’re such a small business, sometimes college interns wonder what we could possibly have to offer, and other employers wonder how we’ve been able to make our internship experiences so valuable both for the interns and for our business.

One of the secrets to our success can be found in our core values. You see, we hire first for value-fit, and then for skills and tasks. If someone is a fit for our company culture, then we’re all more likely to work together to get the work done, but if they’re not a fit, then it seems neither the intern nor the internal team are as willing to get creative about making the internship a success.

Let me give an example or two. In our company, we have always valued helpfulness and going the extra mile. Our current core value is stated that we are “intentionally, reliably useful”. And before we had landed on this exact wording, we had a cultural expectation that we would be helpful to each other as well as to our customers.

That’s just the kind of thing we do – all of us – within this company. It doesn’t matter what role you have or what seat you sit in or what you get paid for the time you work. It’s just how we help each other. And we’ve had such great success hiring interns and teammates who share that value of helpfulness, for many years!

I can recall one memorable moment when we had gotten so used to people being helpful and useful that we just forgot to mention it in the recruiting process. We wound up engaging a couple of interns who didn’t share that value of being helpful. The work they did was good, and generally on time and mistake free, but each of those interns sort of kept to themselves or worked just with each other, and didn’t jump in to help when others needed it. They consistently groused about the “grunt work” when it was their turn to do it, and somehow their recyclables never quite made it out to the recycle bin by their own hands.

The perceived lack of helpfulness caused a bit of tension in the office. Thoughts rattled through team member’s minds such as, “Why aren’t they helping?” “Do they think they’re above this task or too good to help like the rest of us?” “Don’t they like us or want to help us?”. By the end of the assignment, the interns themselves shared feedback indicating that they “never really felt included” or seemed to “not be a part of the team”. And it wasn’t until reflecting on it after the fact that I realized the source of the problem: we hadn’t made core values a focus of their recruiting process. 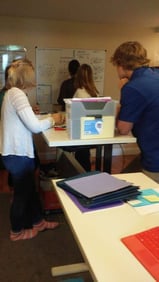 To be clear, our core values aren’t your core values, and that’s fine. Some folks work in highly competitive places, some people prefer more laid-back environments. Some organizations prize innovation, others prefer relentless accuracy and the pursuit of perfection. Each organization needs to determine its own values. But your values need to be shared by all your employees. When you’re bringing on an intern – or any new employee, for that matter – you can train them on skills and tasks, but it’s really hard to train on core values.

Recruit first on values, and then on skills. Save yourself, your team, and your interns unnecessary heartache by recruiting and hiring those who already embrace your organization’s core values.

Interested in learning more about best practices in engaging interns where you work? Check out Internship PROS and join the PROS today!