Recently, I watched an individual, who had been asked to complete a task, make one attempt at it, find the results were not what they thought, put their hands in the air – in a gesture of resignation – and say “Nope it doesn’t work”. They showed no frustration, irritation, or hostility. There was simply apathy, a sense of “I tried it, it didn’t work, and so I’m done.”

On the flip-side, we can all chuckle about the people we know that have tried and tried and tried to do the same thing over and over, unwilling to give in until they complete the task or master the thing. While these people put in more effort, their methods of trying are still a bit futile. 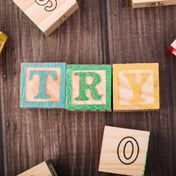 I don’t think either one of these extremes is healthy. I think giving up prematurely means those who were counting on you will be let down, disappointed, and unable to move forward. Alternatively, if you continue making attempts without seeing any results, you’re wasting our organization’s time, energy, and resources to no avail.

So what do we do about it? How do we find the middle ground between the two extremes? I would invite you to consider four simple steps:

1. Try again, but this time carefully.

Picture yourself sitting down to log in to your computer. You enter your password and accidentally mis-key a letter. It doesn’t work. So, you try again, but this time you enter your password a little more carefully. This same concept can apply to any task at hand. After one failed attempt, try the same actions again, but do it carefully. If there’s a chance you were in a hurry or you weren’t following your procedure guide or your notes on how to do the action, you might have taken a misstep. Try it a second time, this time using your notes or your reference guide. Slow down and enunciate each word, type each letter carefully, or check and double-check your math. No matter the task, after one failed attempt, carefully try again a second time. 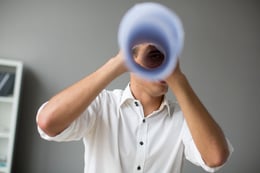 After you’ve tried the same action twice, the second time more carefully than the first, it’s now time to try something different. Try a different approach or a different angle. Try a different way of discussing the situation or a different communication approach. Email didn’t get a response after two sends? Pick up the phone and call. Phone calls and texts weren’t answered? Try stopping by their office. The thing you’re working on not producing results after a couple attempts? Look for the resources around you and try something different to produce the results that you’re after.

Having tried something, tried it again more carefully, and tried it a third time with a different approach, it might be time to ask for help. Stop what you are doing, stop imagining you are the only one who can solve this problem, and raise your hand to ask for help. Ask your leader. Ask a colleague or a peer. Ask the IT expert who is nearby. Ask someone who knows your stakeholder better than you do. Ask for help from someone who has a different vantage point, different perspective, or different set of experiences.

Sometimes we get so caught up in our own frame of reference that we limit our ability to succeed by excluding other angles or other perspectives that might have helped us succeed.

At some point, we need to stop and ask ourselves if this is still the right course of action. If I am unable to be successful after a couple attempts, I’ve tried a few different approaches, and I’ve even asked for help, before making another move, I need to stop and check the plan. How essential is this step in the process? What things are dependent on it? How urgent is it that I solve this problem? At this moment, I have the ability to check my own plan or priorities, or I have the ability to receive direction from my organization on where to go next.

Let’s look at this example

Imagine you’re in the car and your phone has slipped between the seat and the console.

The first attempt to retrieve your phone might come the moment it disappears below the seat. You can simply reach down after it to try and grab it. However, we’ve all been there, and we all know this isn’t a particularly safe attempt while driving.

The second attempt might happen once you are safely stopped. Now you can very carefully focus on reaching your hand down between the center console and your seat to grab the phone. Only, as you do, you accidentally push it just out of reach.

After two failed attempts, attempt three might mean trying a different approach. Instead of trying to squeeze and contort your hand into a spot it doesn’t fit, maybe you use a pen or ice scraper to scoot the phone closer to freedom.

While you might have made progress by trying a different method, your phone is still just out of your reach. But it turns out, it’s well within reach of the person in the backseat. Attempt four is asking your passenger to reach down and grab the phone. Since there are no obstacles between them and the phone, they are able to easily grab it and hand it back to you. 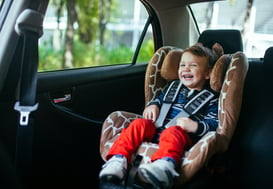 But, let’s say your backseat passenger is restrained in a booster seat. While your phone is within sight, it’s not within reach for them. Attempt four might instead be to check your plan. How vital is your phone to the remainder of the trip? Do you know where you are going? Is your Bluetooth connected so you can answer any incoming calls? If the answer is ‘yes’, you can probably just forget about your phone until you’ve safely arrived at your destination. If the answer is ‘no’, you might need to come up with a new plan for safely retrieving your phone.

I think these four steps apply whether you are trying to solve something for yourself or trying to complete something within an organizational context. Give them a try and see what you think.