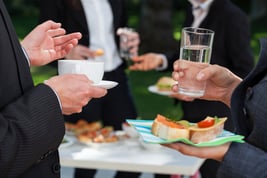 When I think of networking, I think of conferences, as I’m sure most do too. I attended my first in October, and it was something we were constantly reminded of in nearly every session I attended. It was in one of these that the idea of networking was presented with the tagline of ‘Never Eat Alone.’

What a perfect way to present networking in a simple way to someone whose never done it.

When you’re a college kid, and professionals tell you how important it is to go around and talk to strangers, to stick your neck out, to put yourself out there, nerves immediately set in. What 18 year old is confident enough to stroll around introducing themselves? Not many, I promise that. But when one is told it can be as simple as just sitting down to a meal with someone, it gets a little bit easier. There’s a more casual setting added to it.

Have you ever witnessed a freshman orientation? Ever 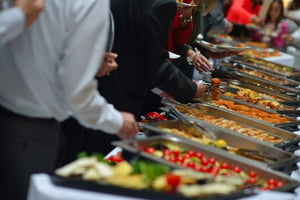 ything about that first day is incredibly similar to a first time networking. You’re whisked off to an unfamiliar place, surrounded by a lot of people you don’t know from Adam, and told to ‘make friends.’ It’s awkward, it’s uncomfortable, and it’s downright terrifying. Until you do it, and then, it gets easy. Or, easier.

At my first day of freshman orientation, I remember being excited, but also nervous. I had lived in the same place my entire life; I had the same friends from elementary school on. I didn’t have a clue how to make new ones. So when I was placed with a group of other students, I was so stressed out and focused on saying and doing the right things, asking the right questions, and having the right answers.

It was a super tense day, and I didn’t think it could get much more so. Then, my group went to lunch, and like that, everything got easier. We as humans all know how to eat. Even a weird 18 year old like I was (am?) knew how to behave in a dining hall. It’s a practiced skill, and easy to sink into. From that point on, the day went much better; I was more relaxed, not as rigid.

So when I went to my first networking event, it felt like I was learning how to make friends all over again. But not friends- no- connections. It was much the same, with me stressing over saying the right things, asking the right questions. What I didn’t fully realize until ‘Never Eat Alone’ was presented to me, was that networking doesn’t have to look a certain way. And it doesn’t have to be only about making connections. No, networking is making friends; it’s connecting with people in similar industry to you. And yes, sometimes it can be awkward, and full of small talk. But that’s okay. It’s about being yourself, and drawing people to you for what you do, not what you want them to think you do.

Your Clear Next Step believes in the importance of ‘Never Eat Alone’ and its basic foundation of connecting people to one another. We also have the tools (workshops, webinars, tips, & tricks) to help you put the concept into action. How to can we help you?

Baillee Furst was an Administrative and Communications Intern at Your Clear Next Step. She helped with our outreach to young professionals through her writing for our website. Outside of this, she helped with final proofing and data analysis. Baillee was a sophomore at Simpson College, majoring in English and Public relations.